After spending hours and hours on Pinterest I finally got off my bum and did one of the ideas that I pinned. 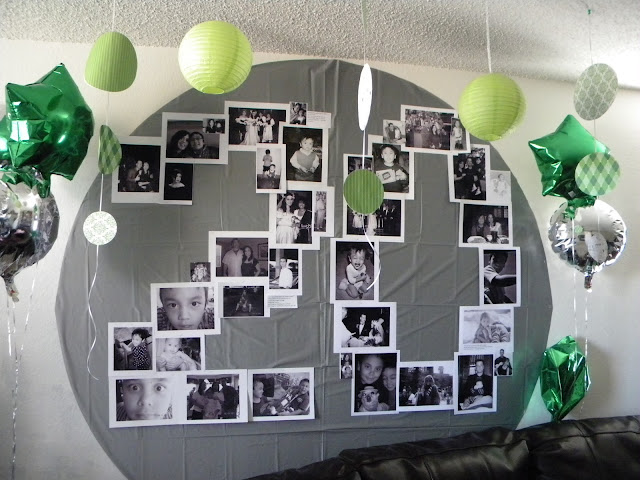 Hubby and I just celebrated our 20th wedding anniversary. I feel very blessed that our marriage has lasted so long. I give Jesus all the credit that we are still a happy couple. I can't take any credit whatsoever. I know this to be truth because the first 10 years of marriage was under my own efforts and I screwed it up.

I'm usually really good at gift giving. But I was having a huge mental block for an anniversary gift. I don't have a large budget and the few items that I did order for my husband is on backorder until October 24. So that really threw a wrench in my original idea. I also have a problem buying gifts for my husband with his hard-earned money. I know it is really OUR money but I still have a mental block on the subject. I gave a lot of thought about what gift to buy hubby but nothing ever seemed right or it was too expensive. I kept warning my husband, "You know I don't have anything to give you." He said he didn't care about gifts and said it's not like he doesn't know that I don't have a job. I know he means it, but I wanted to do something...it is after all our 20 anniversary. Late Monday night as I was falling asleep still trying to figure out what to do I remembered an idea that I saw on Pinterest and inspiration finally hit me. I'm really surprised that I was able to complete this at all. I like a lot of planning because I am a slow crafter. On Tuesday I took my son to the doctor and spent 3 hours running around town trying to pick up supplies and started printing pictures. I had to stop working on it as soon as hubby got home so he wouldn't get suspicious. On Wednesday I jumped out of bed at 5:30am to start decorating.  Much to my chagrin hanging the photos is not as easy as it looks. It took me several tries getting the shape of the zero to work. In addition, I baked the ultimate vanilla cupcakes (which I will blog about), took my other son to the eye doctor which took 3 1/2 hours of my time, and made the number 20 button craft for the frame. I did it all by myself w/o any assistance from anyone. Eat your heart Martha Stewart (who has over 250 crafters and assistants who do most of the work for her).

Hubby was really surprised when he got home. He loved it! 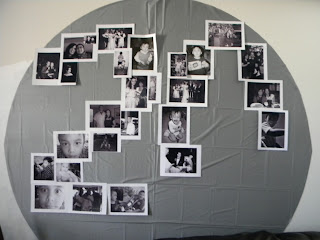 The silver circle is a table cloth.  I picked up 8x10 photo paper and the balloons from the dollar store. I love the dollar store! It sure is a money saver. I used Powerpoint for printing the pictures. 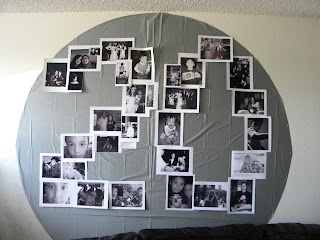 It takes at least 40 sheets of photo paper for this project. You need to give yourself extra sheets in case the ink runs out. I printed out 3 bad pictures before I noticed I needed to change a cartridge.
Make sure you have extra ink too. 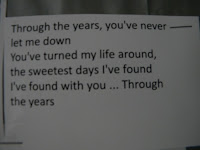 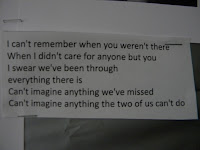 I also printed out verses of the Kenny Roger's song
"Through The Years" and posted them around the pics. 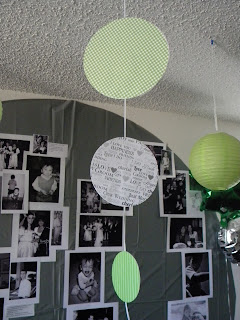 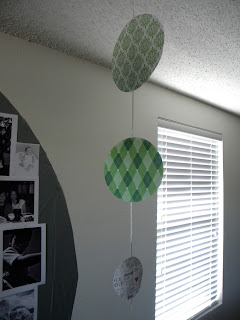 For the hanging circles I used a circle cutter and placed ribbon
in between the circles before I glued them together.
The paper lanterns are $1 each at Michaels. 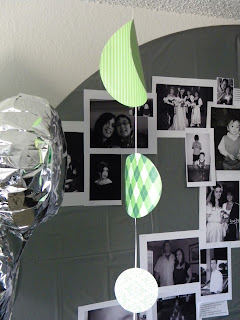 Make sure you don't apply too much glue.
See the big circle on top. It's bending from the weight of the glue. 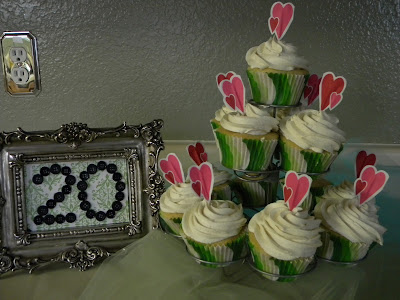 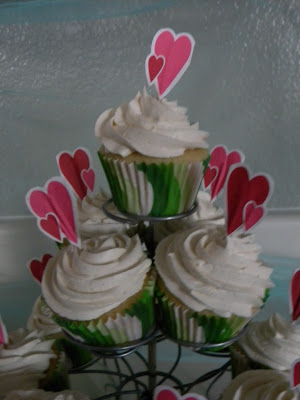 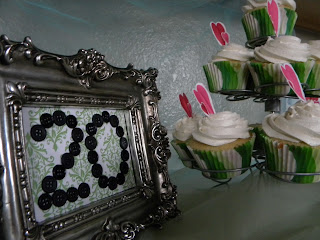 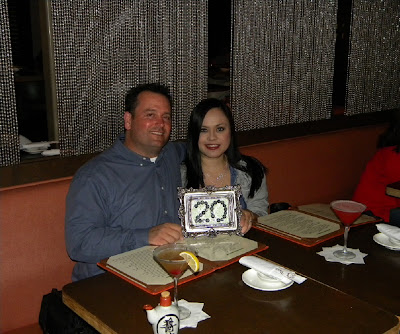 We brought the frame with us to Piranha's. 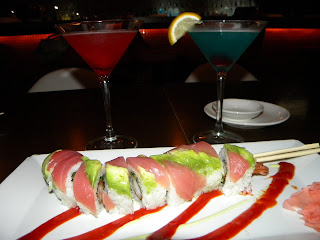 On the Beach Roll and our drinks: Raspberry Bonzai and Cowboytini. 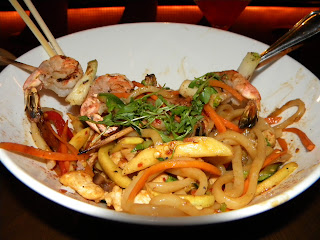 This is my dish Chicken & Shrimp Pad Thai. I had already eaten some of it before
I remembered to take pictures. 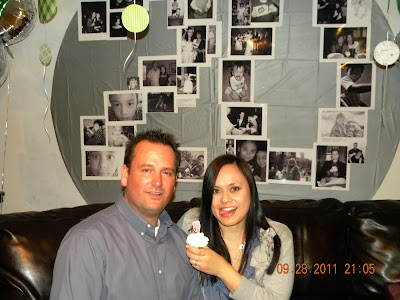 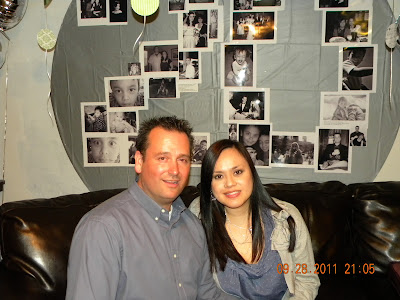 This anniversary idea was shared at:
I http://rocaandcompany.blogspot.com/
Frugalicious Me
http://www.frugaliciousme.com/2011/10/haute-stuff-thursday.html
Confessions of a Stay At Home Mommy

Scrapping and Food and Kids....Oh My!

Many people go through life just doing enough to get by in the world. Admittedly I was one of them. But I no longer want to be just good enough. I want to be excellent. This is my quest in learning to be excellent in whatever new undertaking I plan on tackling whether it's cooking, baking, scrapbooking, writing, project with kids, home decor, and fashion. I'll share bargain alerts and life hacks/tips. I'll allow myself to be vulnerable and share my dealings and feelings on autism, my walk with God, and general musings about life. I will tell you about my daily battle of being a foodie vs. dieting and shopaholicism. Perhaps some of you will feel a kinship as you find we have some interests and feelings in common. Perhaps some of you may think "boring" and quickly move to the next blog but I hope not. I am in the process of learning how to be a writer and I'm aiming to be entertaining and witty. Please feel free to share your thoughts with me.

Sometimes the Join This Site button does not appear. Please come back and follow if it is not working at this time. It usually just takes a click to another site and then coming back for it to appear. http://blogging.nitecruzr.net/2011/06/followers-gadget-content-intermittently.html "Followers Gadget Content Intermittently Visible"

Scrappy Sugar Girl
I wish I were a domestic diva. I love cleaning/organizing ideas but do not actually enjoy cleaning and organizing. I try to create a life filled with "good things" for my family as frugally as possible but oftentimes I splurge. I love shopping, crafting, baking, writing, couponing, and doing good deeds when it is within my power. I do not like exercising & reconciling the bank statements, and taxes but they are necessary evils. You might find some good advice on my "Helpful Hints" tab because I like sharing and sharing is caring. I am ambidextrous. I do all activities as if I were a right-handed person, but write & draw with my left. I love to sing but my voice quavers in public. I am one of the lost and found souls in the song "Amazing Grace". It used to be just a pretty church song, but today the words of the song resonates with my being because I understand the true meaning. The grace of God is truly amazing & such a wonderful gift. God has given me love, mercy, blessings, forgiveness, and a new life that now has hope. I am a new creature in Christ.

Cool! I've Been Featured at: